Writing and publishing books has brought so many wonderful people into my life.  It’s truly my favorite part of the gig.  While some interactions are very brief and mostly done in passing, there are some people I meet who make such an impact that they can’t be forgotten.  Kayleigh’s mother is one of these people.  We met at a signing, became Facebook friends, and kept in touch afterwards.  I remember her writing posts about how scared and uncertain she was because her daughter was having health issues.  She’d have trouble breathing on occasion, even going so far as passing out at school.  The problem was, the doctors couldn’t figure out what was wrong.  Test after test came back normal.  Recreating the situations didn’t give answers because she did fine when the doctors asked her to exert herself.  The family was left with a string of questions and no clear answers.


Here is part of the story, in Kayleigh’s mother’s own words as to how her “phight” began. (Some sections that detail repeated tests with no answers have been omitted from the passage.)

On a Friday in September 2013 (age 7) I got a call from her school that said Kayleigh had passed out. I was there within a few minutes. When I got into the "sick room" at her school she was surrounded by several teachers, the principal and a few others. They were fanning her, had ice on her body, were giving her water and feeding her ice. I cannot tell you how much I love and appreciate the staff at her school. They explained that she had been running during PE, turned extremely pale then fainted. When I got to school she was a little pale but that was it. But I still brought her to the pediatrician's office.


The pediatrician did lab work, a chest xray and had her jump up and down then run all over the hallway trying to recreate the "episode". The lab work showed she was coming down with a virus. They said keep her hydrated and she should be fine.


These "episodes" continued to happen. All of them happened with exercise and none happened at home. We reported each of them to the pediatrician as well as the pedi cardiologist. In March we went back to the pedi cardiologist. He did an Echo, EKG then ordered a 30 day monitor. Again no answers. Again said she needed more exercise. He also said he thought she may be having anxiety attacks when she was exercising and that was causing her to pass out. He sent info to her pediatrician to have her sent for an anxiety check.


By this time I was fed up with feeling as though I was wasting his time and felt defeated.


On July 1st we were on vacation in San Antonio swimming in the hotel's pool. I had been playing with my nephew Brayden, teaching him to go to the bottom and push back up. Brayden and I had been doing this for about 10 minutes when Kayleigh decided she wanted to play too so I started playing with her. In the back if my mind I was thinking "this is good exercise for her". I'd push her to the bottom of the pool then she'd shoot back up like a rocket. After about 2 or 3 times Kayleigh said she needed a rest but I told her no that she needed to keep going, she needed to exercise. We argued back and forth and ended up bobbing into the deep. I could only touch on my tip toes so I continued to bob. Kayleigh, thinking I was going to dunk her, fought me. I lost my touch then but was able to keep her above water by holding her above me. I was convinced she wasn't going to the edge of the pool, she was going to calm down then get more exercise. Once I could touch again I tried to get her to calm down but she continued to fight. Then she screamed that she was going to throw up. I started moving us to the side of the pool but she was still fighting me and we ended up in the deep again. I was able to get us up enough and told Dwain to grab her. As I got her to the edge of the pool she vomited then immediately passed out in it.
Dwain grabbed her from me and pulled her the rest of the way out of the pool, into a sitting position, while I got out. He picked her up and brought her to a lounge chair.
When he put her down she was so pale she was blue, spitting, foaming and convulsing. I told Dwain to call 9-1-1 while I tried to get Kayleigh to talk to me. She couldn't answer any questions I was asking. I asked her questions like What is your name? How old are you? What is our dog's name?...things she should have been able to answer without thinking.
After what felt like hours but was realistically a few minutes Kayleigh began to come around. She got some color back in her face and started answering my questions.
When the firemen and paramedics arrived she was back to herself. She was arguing because she wanted to get back in the pool (answer was a big NO!) and saying she wanted to go to Taco Bell.


The kid scared several years off my life that day!


So what is PH?  Pulmonary Hypertension is a rare, debilitating disease in which high pressure in the arteries of the lung can cause right heart failure. It can affect all ages, races, and is not gender specific.  Symptoms include shortness of breath; dizziness; fatigue; fainting; dry cough; swelling of hands, legs, abdomen, or ankles; and Raynaud’s phenomenon.  These symptoms are more pronounced as the disease progresses.  There is no cure for PH at this time. (PHAssociation.org)

I was lucky enough to meet and spend some time with Kayleigh and her family earlier this year at a New Orleans book signing.  I brought a little surprise for Kayleigh, but she in turn surprised me with a PH Awareness package.  One of the things in the package that captured my attention was a little straw the size of a coffee stirrer that was taped to an instruction card.  The instructions were to put the straw into my mouth, pinch my nose, and try to breathe through the tiny straw to simulate the struggle PH patients face during an attack.  As I fought to breathe through that tiny straw, I felt such an overwhelming sense of empathy for the sufferers of this debilitating disease.  It was an eye-opening and sobering look into what Kayleigh, and the other sufferers of PH deal with far too often.


If you’re curious to know more about PH the resources are out there.  Often, PH goes undiagnosed or is misdiagnosed for quite some time with certain patients.  In Kayleigh’s case, she was told her issues stemmed from asthma, bronchitis, pneumonia, and allergies.  None of the medications given to treat these ailments worked, so the testing continued.  If you’d like to keep up with Kayleigh’s progress, I’m posting the link to her page.  PLEASE consider donating to the PH Association.  They are making great advances every day, and one day, maybe there will be that breakthrough that leads to a cure.  One extra fact, purple is the color for PH Awareness! 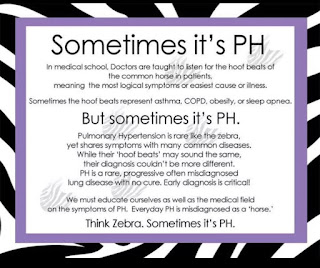 For more information about PH and/or donate to the cause, please visit:  www.phassociation.org

(DISCLAIMER: This post is for awareness purposes only.  It is not intended for use as a medical resource or for diagnosis purposes.  Please see a physician or health care provider if you have any questions or concerns about any health issues or concerns you may have.) 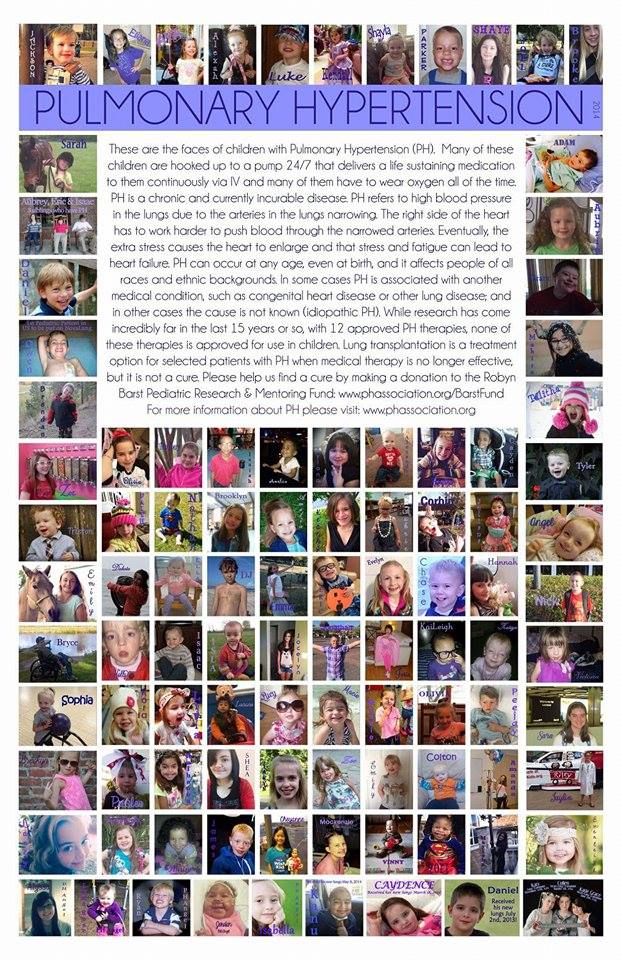